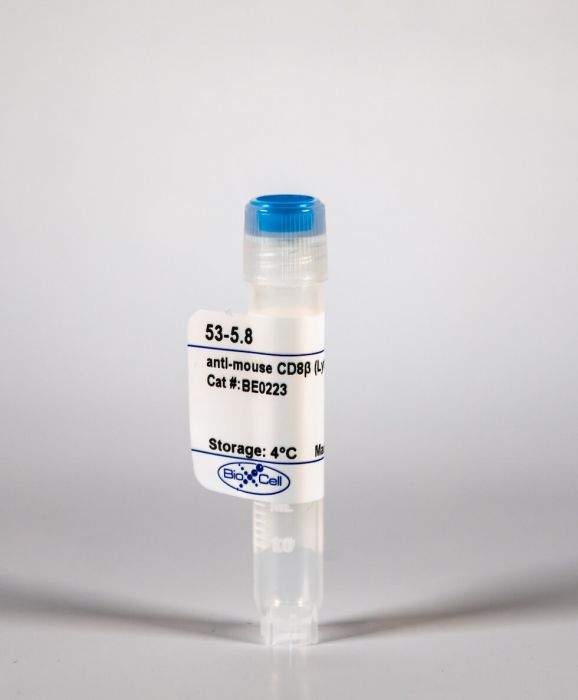 The 53-5.8 monoclonal antibody reacts with mouse CD8β also known as Lyt 3.2. The CD8 antigen is a transmembrane glycoprotein that acts as a co-receptor for the T cell receptor (TCR). Like the TCR, CD8 binds to class I MHC molecules displayed by antigen presenting cells (APC). CD8 is primarily expressed on the surface of cytotoxic T cells, but can also be found on thymocytes, natural killer cells, and some dendritic cell subsets. CD8 most commonly exists as a heterodimer composed of one CD8α and one CD8β chain however, it can also exist as a homodimer composed of two CD8α chains. Both the CD8α and CD8β chains share significant homology to immunoglobulin variable light chains. The molecular weight of each CD8 chain is approximately 34 kDa. The 53-5.8 antibody has been shown to deplete CD8+ T cells completely but not deplete CD8+ CD11c+ dendritic cells when used in vivo.

Multiple myeloma (MM) is an age-dependent hematological malignancy. Evaluation of immune interactions that drive MM relies on in vitro experiments that do not reflect the complex cellular stroma involved in MM pathogenesis. Here we used Vk*MYC transgenic mice, which spontaneously develop MM, and demonstrated that the immune system plays a critical role in the control of MM progression and the response to treatment. We monitored Vk*MYC mice that had been crossed with Cd226 mutant mice over a period of 3 years and found that CD226 limits spontaneous MM development. The CD226-dependent anti-myeloma immune response against transplanted Vk*MYC MM cells was mediated both by NK and CD8+ T cells through perforin and IFN-gamma pathways. Moreover, CD226 expression was required for optimal antimyeloma efficacy of cyclophosphamide (CTX) and bortezomib (Btz), which are both standardly used to manage MM in patients. Activation of costimulatory receptor CD137 with mAb (4-1BB) exerted strong antimyeloma activity, while inhibition of coinhibitory receptors PD-1 and CTLA-4 had no effect. Taken together, the results of this study provide in vivo evidence that CD226 is important for MM immunosurveillance and indicate that specific immune components should be targeted for optimal MM treatment efficacy. As progressive immunosuppression associates with MM development, strategies aimed to increase immune functions may have important therapeutic implications in MM.

Harnessing the immune adjuvant properties of natural killer T (NKT) cells is an effective strategy to generate anticancer immunity. The objective of this study was to increase the potency and durability of vaccine-induced immunity against B cell lymphoma by combining alpha-galactosylceramide (alpha-GalCer)-loaded tumor cell vaccination with an agonistic antibody targeting the immune checkpoint molecule 4-1BB (CD137). We observed potent synergy when combining vaccination and anti-4-1BB antibody treatment resulting in significantly enhanced survival of mice harboring Emu-myc tumors, including complete eradication of lymphoma in over 50% of mice. Tumor-free survival required interferon gamma (IFNgamma)-dependent expansion of CD8+ T cells and was associated with 4-1BB-mediated differentiation of KLRG1+ effector CD8+ T cells. ‘Cured’ mice were also resistant to lymphoma re-challenge 80 days later indicating successful generation of immunological memory. Overall, our results demonstrate that therapeutic anticancer vaccination against B cell lymphoma using an NKT cell ligand can be boosted by subsequent co-stimulation through 4-1BB leading to a sustainable immune response that may enhance outcomes to conventional treatment.

It is becoming increasingly evident that radiotherapy may benefit from coincident or subsequent immunotherapy. In this study, we examined whether the antitumor effects of radiotherapy, in established triple-negative breast tumors could be enhanced with combinations of clinically relevant monoclonal antibodies (mAb), designed to stimulate immunity [anti-(alpha)-CD137, alpha-CD40] or relieve immunosuppression [alpha-programmed death (PD)-1]. While the concomitant targeting of the costimulatory molecules CD137 and CD40 enhanced the antitumor effects of radiotherapy and promoted the rejection of subcutaneous BALB/c-derived 4T1.2 tumors, this novel combination was noncurative in mice bearing established C57BL/6-derived AT-3 tumors. We identified PD-1 signaling within the AT-3 tumors as a critical limiting factor to the therapeutic efficacy of alpha-CD137 therapy, alone and in combination with radiotherapy. Strikingly, all mice bearing established orthotopic AT-3 mammary tumors were cured when alpha-CD137 and alpha-PD-1 mAbs were combined with single- or low-dose fractionated radiotherapy. CD8+ T cells were essential for curative responses to this combinatorial regime. Interestingly, CD137 expression on tumor-associated CD8+ T cells was largely restricted to a subset that highly expressed PD-1. These CD137+PD-1High CD8+ T cells, persisted in irradiated AT-3 tumors, expressed Tim-3, granzyme B and Ki67 and produced IFN-gamma ex vivo in response to phorbol 12-myristate 13-acetate (PMA) and ionomycin stimulation. Notably, radiotherapy did not deplete, but enriched tumors of functionally active, tumor-specific effector cells. Collectively, these data show that concomitant targeting of immunostimulatory and inhibitory checkpoints with immunomodulatory mAbs can enhance the curative capacity of radiotherapy in established breast malignancy.

Previous studies have suggested that naive CD8 T cells require self-peptide-major histocompatability complex (MHC) complexes for maintenance. However, interpretation of such studies is complicated because of the involvement of lymphopenic animals, as lymphopenia drastically alters naive T cell homeostasis and function. In this study, we explored naive CD8 T cell survival and function in nonlymphopenic conditions by using bone marrow chimeric donors and hosts in which class I MHC expression is absent or limited to radiosensitive versus radioresistant cells. We found that long-term survival of naive CD8 T cells (but not CD4 T cells) was impaired in the absence of class I MHC. However, distinct from this effect, class I MHC deprivation also enhanced naive CD8 T cell responsiveness to low-affinity (but not high-affinity) peptide-MHC ligands. We found that this improved sensitivity was a consequence of up-regulated CD8 levels, which was mediated through a transcriptional mechanism. Hence, our data suggest that, in a nonlymphopenic setting, self-class I MHC molecules support CD8 T cell survival, but that these interactions also attenuate naive T cell sensitivity by dynamic tuning of CD8 levels.