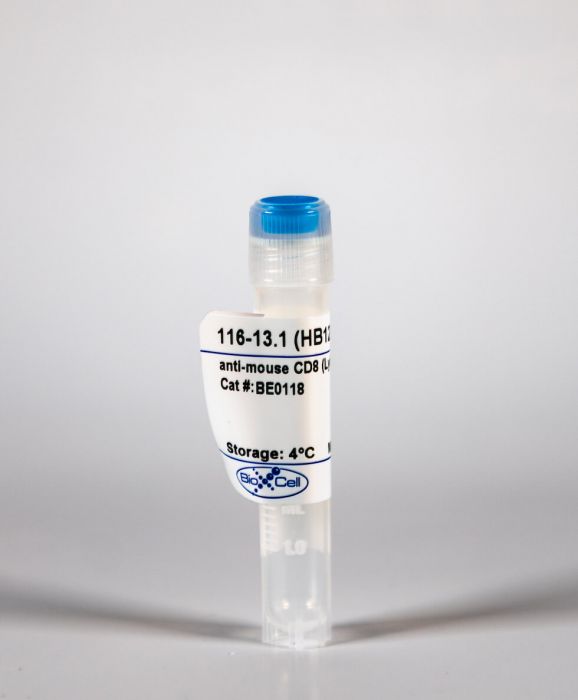 The 116-13.1 monoclonal antibody reacts with the Lyt 2.1 allele of mouse CD8. The CD8 antigen is a transmembrane glycoprotein that acts as a co-receptor for the T cell receptor (TCR). Like the TCR CD8 binds to class I MHC molecules displayed by antigen presenting cells (APC). CD8 is primarily expressed on the surface of cytotoxic T cells but can also be found on thymocytes natural killer cells and some dendritic cell subsets. CD8 most commonly exists as a heterodimer composed of one CD8α and one CD8β chain however it can also exist as a homodimer composed of two CD8α chains. Both the CD8α and CD8β chains share significant homology to immunoglobulin variable light chains. The molecular weight of each CD8 chain is approximately 34 kDa. The 116-13.1 antibody exhibits depleting activity in NOD mice when used in vivo. This antibody does not function in C57BL/6 or BALB/c strains since these strains only express the Lyt 2.2 allele of CD8.

Destruction of pancreatic islet beta-cells in type 1 diabetes (T1D) is mainly mediated by autoimmune T and B lymphocytes. We reported that induction of major histocompatibility complex (MHC)-mismatched mixed chimerism reversed autoimmunity and reestablished thymic negative selection of autoreactive T cells in NOD mice, but it is still unclear how mixed chimerism tolerizes autoreactive B cells. The current studies were designed to reveal the mechanisms on how mixed chimerism tolerizes autoreactive B cells in T1D. Accordingly, mixed chimerism was induced in NOD mice through radiation-free nonmyeloablative anti-CD3/CD8 conditioning and infusion of donor CD4(+) T cell-depleted spleen and whole bone marrow (BM) cells or through myeloablative total body irradiation conditioning and reconstitution with T cell-depleted BM cells from donor and host. Kinetic analysis of percentage and yield of preplasma and plasma B cells, newly developed B-cell subsets, and their apoptosis was performed 30-60 days after transplantation. Induction of MHC-mismatched mixed chimerism results in depleting host-type pre-existing preplasma and plasma B cells as well as augmenting apoptosis of immature transitional T1 B cells, including insulin-specific B cells in a donor B cell-dependent manner. Therefore, induction of MHC-mismatched mixed chimerism depletes pre-existing and de novo-developed autoreactive B cells

In nonautoimmune recipients, induction of mixed and complete chimerism with hematopoietic progenitor cells from MHC (HLA)-matched or -mismatched donors are effective approaches for induction of organ transplantation immune tolerance in both animal models and patients. But it is still unclear whether this is the case in autoimmune recipients. With the autoimmune diabetic NOD mouse model, we report that, although mixed and complete MHC-mismatched chimerism provide immune tolerance to donor-type islet and skin transplants, neither mixed nor complete MHC-matched chimerism does. The MHC-mismatched chimerism not only tolerizes the de novo developed, but also the residual pre-existing host-type T cells in a mismatched MHC class II-dependent manner. In the MHC-mismatched chimeras, the residual host-type peripheral T cells appear to be anergic with upregulation of PD-1 and downregulation of IL-7Ralpha. Conversely, in the MHC-matched chimeras, the residual host-type peripheral T cells manifest both alloreactivity and autoreactivity; they not only mediate insulitis and sialitis in the recipient, but also reject allogeneic donor-type islet and skin grafts. Interestingly, transgenic autoreactive BDC2.5 T cells from Rag1(+/+), but not from Rag1(-/-), NOD mice show alloreactivity and mediate both insulitis and rejection of allografts. Taken together, MHC-mismatched, but not MHC-matched, chimerism can effectively provide transplantation immune tolerance in autoimmune recipients.

Targeted and immune-based therapies are thought to eradicate cancer cells by different mechanisms, and these approaches could possibly complement each other when used in combination. In this study, we report that the in vivo antitumor effects of the c-KIT inhibitor, dasatinib, on the c-KIT mutant P815 mastocytoma tumor were substantially dependent on T cell-mediated immunity. We found that dasatinib treatment significantly decreased levels of Tregs while specifically enhancing tumor antigen-specific T-cell responses. We sought to further enhance this therapy with the addition of anti-OX40 antibody, which is known to provide a potent costimulatory signal to T cells. The combination of dasatinib and anti-OX40 antibody resulted in substantially better therapeutic efficacy compared with either drug alone, and this was associated with enhanced accumulation of tumor antigen-specific T cells in the tumor microenvironment. Furthermore, the combination regimen inhibited the function of Tregs and also resulted in significantly up-regulated expression of the IFN-gamma-induced chemokines CXCL9, 10, and 11 in the tumor microenvironment, which provides a feasible mechanism for the enhanced intratumoral CTL infiltration. These studies delineate a strategy by which targeted therapy and immunotherapy may be combined to achieve superior antitumor responses in cancer patients.