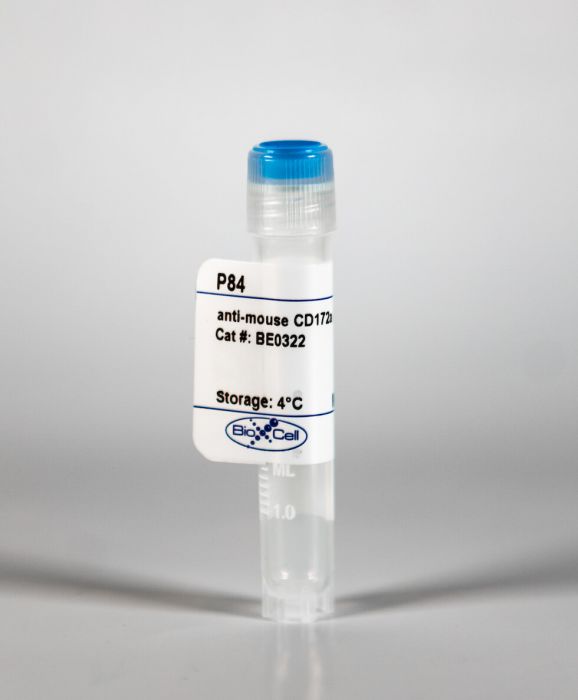 The P84 monoclonal antibody reacts with Signal-Regulatory Protein α (SIRPα), also known as CD172a. SIRPα is a type I transmembrane glycoprotein expressed on monocytes, macrophages, and dendritic cells. Neurons and other tissues of the central nervous system have also been shown to express SIRPα. Its ligand, CD47 is expressed by a wide variety of cells. SIRPα and CD47 regulate dendritic cell-mediated T cell activation, neutrophil migration, and phagocytosis. SIRPα diffuses laterally on the macrophage membrane and accumulates at a phagocytic synapse to bind CD47 which inhibits phagocytosis by macrophages. Anti-SIRPα antibodies that block the interaction of SIRPα with CD47 have been shown to suppress tumor formation in mice. The P84 antibody has been shown to have neutralizing activity in vivo and in vitro.

Tumor cells are thought to evade immune surveillance through interaction with immune cells. Much recent attention has focused on the modification of immune responses as a basis for new cancer treatments. SIRPalpha is an Ig superfamily protein that inhibits phagocytosis in macrophages upon interaction with its ligand CD47 expressed on the surface of target cells. Here, we show that SIRPalpha is highly expressed in human renal cell carcinoma and melanoma. Furthermore, an anti-SIRPalpha Ab that blocks the interaction with CD47 markedly suppressed tumor formation by renal cell carcinoma or melanoma cells in immunocompetent syngeneic mice. This inhibitory effect of the Ab appeared to be mediated by dual mechanisms: direct induction of Ab-dependent cellular phagocytosis of tumor cells by macrophages and blockade of CD47-SIRPalpha signaling that negatively regulates such phagocytosis. The antitumor effect of the Ab was greatly attenuated by selective depletion not only of macrophages but also of NK cells or CD8(+) T cells. In addition, the anti-SIRPalpha Ab also enhances the inhibitory effects of Abs against CD20 and programmed cell death 1 (PD-1) on tumor formation in mice injected with SIRPalpha-nonexpressing tumor cells. Anti-SIRPalpha Abs thus warrant further study as a potential new therapy for a broad range of cancers.

We have previously proven that the interspecies incompatibility of CD47 is responsible for in vitro phagocytosis of xenogeneic cells by host macrophages. Utilizing an in vivo model in the present study, we investigated whether genetically engineered expression of mouse CD47 in rat insulinoma cells (INS-1E) could inhibit macrophage-mediated xenograft rejection. INS-1E cells transfected with the pRc/CMV-mouse CD47 vector (mCD47-INS-1E) induced SIRPalpha-tyrosine phosphorylation in mouse macrophages in vitro, whereas cells transfected with the control vector (cont-INS-1E) did not. When these cells were injected into the peritoneal cavity of streptozotocin-induced diabetic Rag2(-/-)gamma chain (-/-) mice, which lack T, B, and NK cells, the expression of mouse CD47 on the INS-1E cells markedly reduced the susceptibility of these cells to phagocytosis by macrophages. Moreover, these mice became normoglycemic after receiving mCD47-INS-1E, whereas the mice that received cont-INS-1E failed to achieve normoglycemia. Furthermore, injection of an anti-mouse SIRPalpha blocking monoclonal antibody into the mouse recipients of mCD47-INS-1E cells prevented achievement of normoglycemia. These results demonstrate that interspecies incompatibility of CD47 significantly contributes to in vivo rejection of xenogeneic cells by macrophages. Thus, genetic induction of the expression of recipient CD47 on xenogeneic donor cells could provide inhibitory signals to recipient macrophages via SIPRalpha; this constitutes a novel approach for preventing macrophage-mediated xenograft rejection.

Signal regulatory protein alpha (SIRPalpha), an immunoreceptor tyrosine-based inhibitory motif (ITIM)-containing receptor, is an essential negative regulator of leukocyte inflammatory responses. Here we report that SIRPalpha cytoplasmic signalling ITIMs in neutrophils are cleaved during active inflammation and that the loss of SIRPalpha ITIMs enhances the polymorphonuclear leukocyte (PMN) inflammatory response. Using human leukocytes and two inflammatory models in mice, we show that the cleavage of SIRPalpha ITIMs in PMNs but not monocytes occurs at the post-acute stage of inflammation and correlates with increased PMN recruitment to inflammatory loci. Enhanced transmigration of PMNs and PMN-associated tissue damage are confirmed in mutant mice expressing SIRPalpha but lacking the ITIMs. Moreover, the loss of SIRPalpha ITIMs in PMNs during colitis is blocked by an anti-interleukin-17 (IL-17) antibody. These results demonstrate a SIRPalpha-based mechanism that dynamically regulates PMN inflammatory responses by generating a CD47-binding but non-signalling SIRPalpha ‘decoy’.

Physical interaction between the cell surface receptors CD47 and signal regulatory protein alpha (SIRPalpha) was reported to regulate cell migration, phagocytosis, cytokine production, and macrophage fusion. However, it is unclear if the CD47/SIRPalpha-interaction can also regulate macrophage colony-stimulating factor (M-CSF) and receptor activator of nuclear factor (NF)-kappaB ligand (RANKL)-stimulated formation of osteoclasts. Here, we show that functional blocking antibodies to either CD47 or SIRPalpha strongly reduced formation of multinucleated tartrate-resistant acid phosphatase (TRAP)+ osteoclasts in cultures of murine hematopoietic cells, stimulated in vitro by M-CSF and RANKL. In addition, the numbers of osteoclasts formed in M-CSF/RANKL-stimulated bone marrow macrophage cultures from CD47-/- mice were strongly reduced, and bones of CD47-/- mice exhibited significantly reduced osteoclast numbers, as compared with wild-type controls. We conclude that the CD47/SIRPalpha interaction is important for M-CSF/RANKL-stimulated osteoclast formation both in vivo and in vitro, and that absence of CD47 results in decreased numbers of osteoclasts in CD47-/- mice.

In autoimmune hemolytic anemia (AIHA), circulating red blood cells (RBCs) opsonized with autoantibody are recognized by macrophage Fcgamma and complement receptors. This triggers phagocytosis and elimination of RBCs from the circulation by splenic macrophages. We recently found that CD47 on unopsonized RBCs binds macrophage signal regulatory protein alpha (SIRPalpha), generating a negative signal that prevents phagocytosis of the unopsonized RBCs. We show here that clearance and phagocytosis of opsonized RBCs is also regulated by CD47-SIRPalpha. The inhibition generated by CD47-SIRPalpha interaction is strongly attenuated but not absent in mice with only residual activity of the phosphatase Src homology 2 domain-containing protein tyrosine phosphatase (SHP)-1, suggesting that most SIRPalpha signaling in this system is mediated by SHP-1 phosphatase activity. The macrophage phagocytic response is controlled by an integration of the inhibitory SIRPalpha signal with prophagocytic signals such as from Fcgamma and complement receptor activation. Thus, augmentation of inhibitory CD47-SIRPalpha signaling may prevent or attenuate RBC clearance in AIHA.