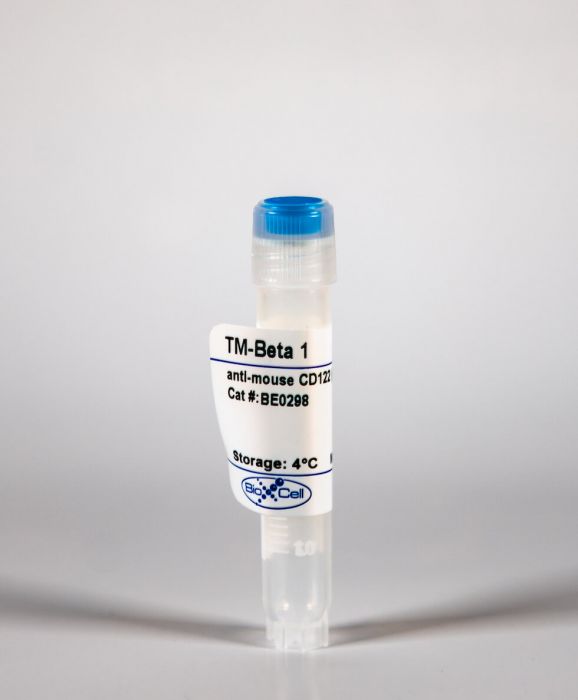 The TM-beta 1 monoclonal antibody reacts with mouse CD122 also known as the IL-2 receptor beta chain. CD122 is a 70-75 kDa subunit of the IL-2 receptor and the IL-15 receptor. CD122 is expressed on NK cells and at lower levels by T lymphocytes, B lymphocytes, monocytes, and macrophages. The IL-2R has been shown to play roles in lymphocyte differentiation, activation, and proliferation. In complex with IL-2Rα, IL-2R binds IL-2 with relatively low affinity however, when CD122 combines with IL-2Rα and the common gamma chain (CD132) the complex binds IL-2 with high affinity. The TM-beta 1 antibody is reported to inhibit binding of IL-2 to the IL-2R. Additionally, this antibody has been shown to deplete CD122 expressing NK cells with administered in vivo.

Peptide vaccines can be a successful and cost-effective way of generating T-cell responses against defined tumor antigens, especially when combined with immune adjuvants such as poly-IC. However, strong immune adjuvants can induce a collateral increase in numbers of irrelevant, nonspecific T cells, which limits the effectiveness of the peptide vaccines. Here, we report that providing prolonged IL2 signaling in the form of either IL2/anti-IL2 complexes or pegylated IL2 overcomes the competitive suppressive effect of irrelevant T cells, allowing the preferential expansion of antigen-specific T cells. In addition to increasing the number of tumor-reactive T cells, sustained IL2 enhanced the ability of T cells to resist PD-1-induced negative signals, increasing the therapeutic effectiveness of the vaccines against established tumors. This vaccination strategy using peptides and sustained IL2 could be taken into the clinic for the treatment of cancer.

The destruction of beta-cells in type 1 diabetes (T1D) progresses silently until only a minor fraction of the beta-cells remain. A late acting therapy leading to the prevention of further beta-cell killing would therefore be desirable. CD122, the beta chain of the interleukin-2 receptor, is highly expressed on natural killer (NK) cells and on a subpopulation of CD8 T cells. In this study, we have treated non-obese diabetic (NOD) mice with a depleting antibody against CD122. The treatment protected from diabetes, even when initiated just before disease onset. The degree of leukocyte infiltration into islets was unaffected by the treatment, further supporting effectiveness late in the disease process. It effectively removed all NK cells from the spleen, pancreas and pancreatic lymph nodes and abolished NK cell activity. Interestingly, despite the lack of CD122 expression on CD8 T cells in the pancreas, the overall frequency of CD8 cells decreased in this organ, whereas it was unaffected in the spleen. T cells were also still capable to respond against a foreign antigen. Conclusively, targeting of CD122(+) cells could represent a novel treatment strategy against T1D.

Differentiation and homeostasis of natural killer (NK) cells relies on common gamma-chain (gammac)-dependent cytokines, in particular IL-15. Consequently, NK cells do not develop in mice with targeted gammac deletion. Herein we identify an alternative pathway of NK-cell development driven by the proinflammatory cytokine IL-12, which can occur independently of gammac-signalling. In response to viral infection or upon exogenous administration, IL-12 is sufficient to elicit the emergence of a population of CD122+CD49b+ cells by targeting NK-cell precursors (NKPs) in the bone marrow (BM). We confirm the NK-cell identity of these cells by transcriptome-wide analyses and their ability to eliminate tumour cells. Rather than using the conventional pathway of NK-cell development, IL-12-driven CD122+CD49b+ cells remain confined to a NK1.1lowNKp46low stage, but differentiate into NK1.1+NKp46+ cells in the presence of gammac-cytokines. Our data reveal an IL-12-driven hard-wired pathway of emergency NK-cell lymphopoiesis bypassing steady-state gammac-signalling.

NK cells represent a link between innate and adaptive immunity, and may play a role in regulating autoimmune disorders. We have characterized the NK cell population in non-obese diabetic (NOD) mice. The percentage and absolute numbers of NK cells were similar in NOD and control MHC-matched B6.g7 mice. However, the capacity of NOD NK cells to mediate natural cytotoxicity as well as FcR- and Ly49D-mediated killing was compromised in vitro, suggesting a defect affecting multiple activation pathways. The defect was neither linked to the NK gene complex nor to the MHC, as determined by comparison with mice congenic for these regions. Introducing the beta(2)-microglobulin mutation on the NOD background further impaired NK cell function, showing that the compromised cytotoxic capacity in these two strains arises from two independent mechanisms. In vivo rejection responses against tumor cells and against MHC class I-deficient spleen cells were decreased in naive NOD recipients, but restored in mice pre-activated with tilorone, a potent activator of NK cells. In addition, killing of some tumor targets was restored in vitro after activation of NK cells with IL-12 plus IL-18 or with IFN-alpha/beta, but not with IL-2. Interestingly, natural killing of RMA-S targets by NOD NK cells could not be restored in vitro, indicating that restoration of killing capacity was only partial. Our data suggest a severe, but partially restorable, killing defect in NOD NK cells, affecting activation through several pathways.

The interleukin 2 receptor beta chain (IL-2R beta) is preferentially expressed in natural killer (NK) cells, but is not detected in a majority of resting T and B cells. We recently established a novel monoclonal antibody (mAb) to murine IL-2R beta and examined in vivo the effect of the mAb in mice. We found that intraperitoneal injection of the anti-IL-2R beta mAb into adult mice resulted in a selective in vivo elimination of splenic NK function in various mouse strains. The reduction of NK cell function is associated with complete disappearance of NK1.1+ cells in C57BL/6 mice. Other lymphocyte subsets in the thymus and spleen were uncompromised. T cell function was not affected by the mAb treatment as judged by allogeneic cytotoxic T cell induction. The single injection of anti-IL-2R beta mAb caused a long-term elimination of splenic NK cells, lasting for at least 5 wk. We also found that NK and/or NK precursor cells become susceptible to the mAb treatment only after birth, suggesting that functional maturation of NK cells in terms of IL-2R beta expression is a later event in the course of NK cell development. The use of the anti-IL-2R beta mAb will be useful in defining the physiological role of NK cells in host defense as well as dissecting their developmental pathway in vivo.

A mAb specific for the murine IL-2R beta-chain (IL-2R beta) was produced by immunizing a rat with a rat transfectant cell line expressing a large number of cDNA-encoded murine IL-2R beta. The mAb, designated TM-beta 1, is specifically reactive with the murine IL-2R beta cDNA-transfectant but not with the recipient cell, and immunoprecipitates murine IL-2R beta of Mr 75 to 85 kDa. TM-beta 1 mAb completely abolished the high affinity IL-2 binding by inhibiting the ligand binding to IL-2R beta. Murine IL-2R beta was found to be constitutively expressed on a subpopulation of CD8+ T cells and almost all NK1.1+ NK cells in the spleen, whereas TM-beta 1 mAb inhibited the proliferation of spleen cells induced by 1 nM of IL-2. Interestingly, EL-4 cells that express murine IL-2R beta as detected by TM-beta 1 mAb can bind neither human nor murine IL-2 under the intermediate affinity conditions, although cDNA-directed human IL-2R beta expressed in the same EL-4 cells has been previously shown to manifest the intermediate affinity IL-2 binding. These results may imply that functional expression of IL-2R beta is differentially regulated between humans and mice. Finally, our neutralizing anti-IL-2R beta mAb TM-beta 1 will be useful not only for various in vitro studies but also for in vivo studies to directly investigate the possible involvement of the IL-2/IL-2R pathway in the generation and differentiation of T lymphocytes and NK cells.