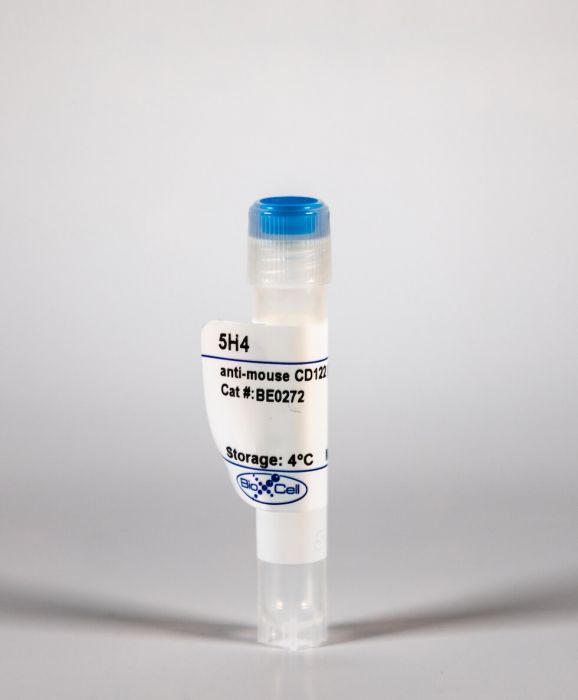 The 5H4 monoclonal antibody reacts with mouse CD122 also known as the IL-2 receptor beta chain. CD122 is a 70-75 kDa subunit of the IL-2 receptor and the IL-15 receptor. CD122 is expressed on NK cells and at lower levels by T lymphocytes, B lymphocytes, monocytes, and macrophages. The IL-2R has been shown to play roles in lymphocyte differentiation, activation, and proliferation. In complex with IL-2Rα, IL-2R binds IL-2 with relatively low affinity however, when CD122 combines with IL-2Rα and the common gamma chain (CD132) the complex binds IL-2 with high affinity. The 5H4 antibody does not inhibit binding of IL-2 to the IL-2R.

Natural killer (NK) cell maturation is a tightly controlled process that endows NK cells with functional competence and the capacity to recognize target cells. Here, we found that the transcription factor (TF) Zeb2 was the most highly induced TF during NK cell maturation. Zeb2 is known to control epithelial to mesenchymal transition, but its role in immune cells is mostly undefined. Targeted deletion of Zeb2 resulted in impaired NK cell maturation, survival, and exit from the bone marrow. NK cell function was preserved, but mice lacking Zeb2 in NK cells were more susceptible to B16 melanoma lung metastases. Reciprocally, ectopic expression of Zeb2 resulted in a higher frequency of mature NK cells in all organs. Moreover, the immature phenotype of Zeb2(-/-) NK cells closely resembled that of Tbx21(-/-) NK cells. This was caused by both a dependence of Zeb2 expression on T-bet and a probable cooperation of these factors in gene regulation. Transgenic expression of Zeb2 in Tbx21(-/-) NK cells partially restored a normal maturation, establishing that timely induction of Zeb2 by T-bet is an essential event during NK cell differentiation. Finally, this novel transcriptional cascade could also operate in human as T-bet and Zeb2 are similarly regulated in mouse and human NK cells.

In this study, we tested the hypothesis that systemic administration of TLR3 agonist poly I:C can enhance T cell infiltration of lung through up-regulating IL-7 expression. poly I:C, a synthetic analog of viral dsRNA and a TLR3 agonist, is studied extensively as vaccine adjuvant as a result of its pleotropic immune-stimulatory effects. Here, we show that systemic poly I:C administration induces substantial IL-7 production in the lung in a type 1 IFN- and IFN-gamma-dependent fashion. Blockade of the IL-7Ralpha signal with a neutralizing antibody abrogated poly I:C-induced MCP-1 up-regulation, macrophage recruitment, and CXCR3 ligand expression in the lung. Conversely, administration of IL-7 enhances these events, and it does so by enhancing T cell IFN-gamma production. We also show that the initial up-regulation of CXCR3 ligands and infiltration of T cells in the lung are mediated by poly I:C-induced IFN-gamma from NK cells; however, the sustained and optimal CXCR3 ligand expression and T cell infiltration require poly I:C-induced IL-7 and T cell-derived IFN-gamma. In a model of multiorgan inflammation elicited by adoptive transfer of immune cells into RAG1(-/-) mice, we show that poly I:C enhances IL-7 production in the lung and promotes expression of CXCR3 ligands and recruitment of IFN-gamma(+) T cells in an IL-7-dependent fashion. Collectively, these results strongly support our hypothesis and delineate a new mechanism by which poly I:C boosts the T cell immune response in the lung by inducing local IL-7 production, which in turn, enhances T cell-derived IFN-gamma to promote macrophage recruitment, CXCR3 ligand expression, and T cell infiltration.

We have recently identified two groups of plasmacytoid dendritic cells (pDCs) isolated from murine liver based on the expression of CD4 and other cell surface markers uniquely expressed by pDCs. Herein, we describe the identification of both CD4+ and CD4- pDCs that clearly exist in lymph nodes (LNs), spleen, liver, thymus, bone marrow, and lung. Normally, CD4+ pDCs are enriched in LNs. However, after in vivo systemic injection with bacterial CpG, a larger number of CD4- pDCs are recruited to the LNs and local inoculation by CpG drives CD4- pDCs migrating into local sentinel LNs, suggesting that CD4- pDCs are the main subpopulation migrating to the peripheral LNs. Furthermore, although both freshly isolated CD4+ pDCs and CD4- pDCs appear as an immature plasmacytoid cell and develop into a DC morphology following activation, the two subsets have strikingly different immune features, including differences in the production pattern of cytokines stimulated with CpG and in T cell activation.

To study the structural basis of ligand-induced receptor-mediated internalization of interleukin-2 (IL-2), a strategy has been developed to generate variant T cells that are deficient in internalization of this cytokine. IL-2 receptor (IL-2R) alpha- and beta-bearing EL4 cells, that express high-affinity IL-2R and internalize IL-2, were treated with low doses of IL-2-Pseudomonas exotoxin chimeric protein (IL-2-PE40). This treatment resulted in isolation of a variant (CX1) that was unable to express high-affinity IL-2R or internalize IL-2. Transfection of CX1 with the IL-2R beta cDNA led to surface expression of IL-2R beta and high-affinity IL-2R as well as the ability to internalize IL-2. This finding indicates that the absence of the beta subunit was the sole defect in CX1 responsible for its failure to internalize IL-2. By transfecting CX1 with mutated beta cDNA, several CX1 transfectants were produced that expressed a beta-subunit that lacked all amino acids of the intracytoplasmic region. These transfectants expressed high-affinity IL-2R and internalized IL-2 at a rate comparable to cells expressing wild-type beta-chain. These results demonstrate that internalization of IL-2 is independent of any signals contained in the intracytoplasmic tail of the beta subunit and raise the possibility that such signals may be entirely contained within the gamma subunit.