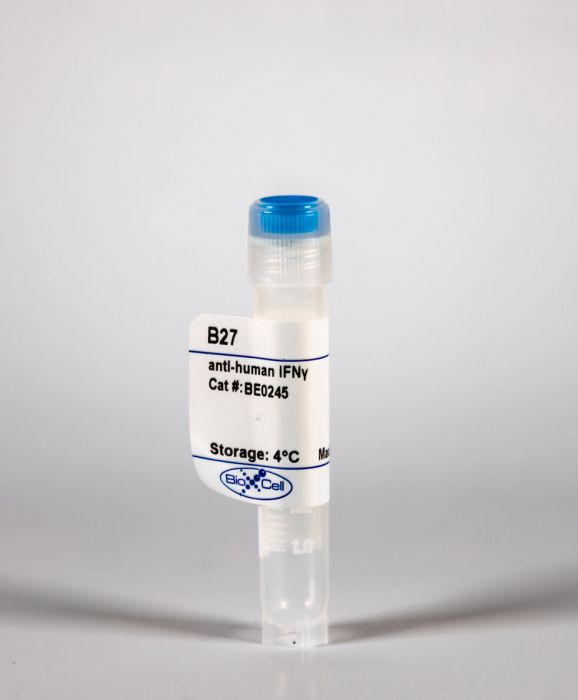 The B27 monoclonal antibody reacts with human IFNγ (interferon gamma) a 20 kDa soluble pleiotropic cytokine and the sole member of the type II class of interferons. IFNγ is primarily produced by activated lymphocytes including T, B, NK cells, and ILCs. IFNγ exerts immunoregulatory, anti-proliferative, anti-viral, and proinflammatory activities and plays an important role in activation, growth, and differentiation of T and B lymphocytes, macrophages, NK cells and other non-hematopoietic cell types. Additionally, IFNγ induces the production of cytokines, Fc receptor, and adhesion molecules and up-regulates MHC class I and II antigen expression by antigen presenting cells during an immune response. IFNγ has also been shown to modulate macrophage effector functions, influence isotype switching and induce the secretion of immunoglobulins by B cells. IFNγ signals through the IFN gamma receptor which exists as a heterodimer composed of CD119 (IFN gamma receptor 1) and AF-1 (IFN gamma receptor 2). The IFNγ receptor is expressed ubiquitously on almost all cell types with the exception of mature erythrocytes. The B27 antibody can neutralize the bioactivity of natural or recombinant IFNγ.

Human dendritic cells (hDCs) produce IL-2 and express IL-2R alpha-chain (CD25), but the role of IL-2 in DC functions is not well defined. A recent study suggested that the main function of CD25 on hDCs was to transpresent IL-2 to activate T lymphocytes. Our results demonstrate the expression of the three chains of the IL-2R on hDCs and that IL-2 induces STAT5 phosphorylation. Interestingly, use of inhibitors of p-STAT5 revealed that IL-2 increases LPS-induced IFN-gamma through STAT5 phosphorylation. Finally, we report that IL-2 increases the ability of hDCs to activate helpless CD8(+) T cells, most likely because of IL-2-triggered IFN-gamma synthesis, as we previously described. For the first time, to our knowledge, we disclose that IL-2 induces monocyte-derived hDC’s functional maturation and activation through IL-2R binding. Interestingly, our study suggests a direct effect of anti-CD25 mAbs on hDCs that may contribute to their clinical efficacy.

ZMAb is a promising treatment against Ebola virus (EBOV) disease that has been shown to protect 50% (two of four) of nonhuman primates (NHPs) when administered 2 days post-infection (dpi). To extend the treatment window and improve protection, we combined ZMAb with adenovirus-vectored interferon-alpha (Ad-IFN) and evaluated efficacy in EBOV-infected NHPs. Seventy-five percent (three of four) and 100% (four of four) of cynomolgus and rhesus macaques survived, respectively, when treatment was initiated after detection of viremia at 3 dpi. Fifty percent (two of four) of the cynomolgus macaques survived when Ad-IFN was given at 1 dpi, followed by ZMAb starting at 4 dpi, after positive diagnosis. The treatment was able to suppress viremia reaching ~10(5) TCID50 (median tissue culture infectious dose) per milliliter, leading to survival and robust specific immune responses. This study describes conditions capable of saving 100% of EBOV-infected NHPs when initiated after the presence of detectable viremia along with symptoms.

Progressive disease caused by pathogenic SIV/HIV infections is marked by systemic hyperimmune activation, immune dysregulation, and profound depletion of CD4(+) T cells in lymphoid and gastrointestinal mucosal tissues. IL-17 is important for protective immunity against extracellular bacterial infections at mucosa and for maintenance of mucosal barrier. Although IL-17-secreting CD4 (Th17) and CD8 (Tc17) T cells have been reported, very little is known about the latter subset for any infectious disease. In this study, we characterized the anatomical distribution, phenotype, and functional quality of Tc17 and Th17 cells in healthy (SIV-) and SIV+ rhesus macaques. In healthy macaques, Tc17 and Th17 cells were present in all lymphoid and gastrointestinal tissues studied with predominance in small intestine. About 50% of these cells coexpressed TNF-alpha and IL-2. Notably, approximately 50% of Tc17 cells also expressed the co-inhibitory molecule CTLA-4, and only a minority (<20%) expressed granzyme B suggesting that these cells possess more of a regulatory than cytotoxic phenotype. After SIV infection, unlike Th17 cells, Tc17 cells were not depleted during the acute phase of infection. However, the frequency of Tc17 cells in SIV-infected macaques with AIDS was lower compared with that in healthy macaques demonstrating the loss of these cells during end-stage disease. Antiretroviral therapy partially restored the frequency of Tc17 and Th17 cells in the colorectal mucosa. Depletion of Tc17 cells was not observed in colorectal mucosa of chronically infected SIV+ sooty mangabeys. In conclusion, our results suggest a role for Tc17 cells in regulating disease progression during pathogenic SIV infection.