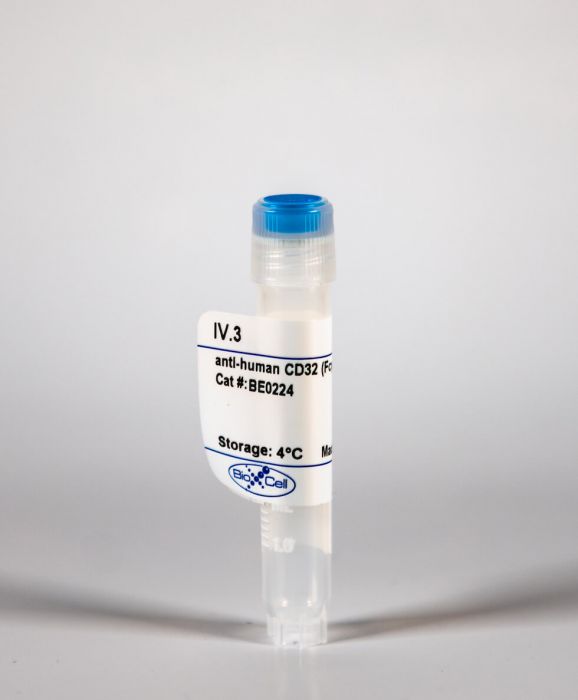 The IV.3 monoclonal antibody reacts with human CD32 also known as FcγRII and FCRII, a 40 kDa polymorphic transmembrane glycoprotein and an Ig superfamily member. CD32 is expressed on monocytes/macrophages, granulocytes, platelets and B cells. CD32 enables interaction between Fc γ RII-expressing cells and opsonized antigen or IgG-containing immune complexes. This allows CD32 to function in the activation or inhibition of immune responses including degranulation, phagocytosis, ADCC, cytokine release, and B cell proliferation. The IV.3 antibody has been shown to block the biological effects of CD32 in vitro. Additionally, IV.3 f(ab’)2 fragments have been used to block CD32 in vivo in transgenic mice expressing human CD32.

Platelets store and secrete the chemokine stromal cell-derived factor (SDF)-1alpha upon platelet activation, but the ability of platelet-derived SDF-1alpha to signal in an autocrine/paracrine manner mediating functional platelet responses relevant to thrombosis and haemostasis is unknown. We sought to explore the role of platelet-derived SDF-1alpha and its receptors, CXCR4 and CXCR7 in facilitating platelet activation and determine the mechanism facilitating SDF-1alpha-mediated regulation of platelet function. Using human washed platelets, CXCR4 inhibition, but not CXCR7 blockade significantly abrogated collagen-mediated platelet aggregation, dense granule secretion and thromboxane (Tx) A2 production. Time-dependent release of SDF-1alpha from collagen-activated platelets supports a functional role for SDF-1alpha in this regard. Using an in vitro whole blood perfusion assay, collagen-induced thrombus formation was substantially reduced with CXCR4 inhibition. In washed platelets, recombinant SDF-1alpha in the range of 20-100 ng/mL(-1) could significantly enhance platelet aggregation responses to a threshold concentration of collagen. These enhancements were completely dependent on CXCR4, but not CXCR7, which triggered TxA2 production and dense granule secretion. Rises in cAMP were significantly blunted by SDF-1alpha, which could also enhance collagen-mediated Ca2+ mobilisation, both of which were mediated by CXCR4. This potentiating effect of SDF-1alpha primarily required TxA2 signalling acting upstream of dense granule secretion, whereas blockade of ADP signalling could only partially attenuate SDF-1alpha-induced platelet activation. Therefore, this study supports a potentially novel autocrine/paracrine role for platelet-derived SDF-1alpha during thrombosis and haemostasis, through a predominantly TxA2-dependent and ADP-independent pathway.

The mechanisms preventing detrimental T-cell responses against commensal skin bacteria remain elusive. Using monocyte-derived and skin-derived dendritic cells (DCs), we demonstrate that epidermal Langerhans cells (LCs), the DCs in the most superficial layer of the skin, have a poor capacity to internalize bacteria because of low expression of FcgammaRIIa. Furthermore, LCs show deficiency in processing and major histocompatibility complex II (MHC-II)-restricted presentation of bacterial antigens, as a result of a decreased expression of molecules involved in these functionalities. The reduced capacity to take up, process, and present bacterial antigens cannot be restored by LC activation by ectopically expressed Toll-like receptors or by cytokines. Consequently, bacteria-primed LCs poorly restimulate antibacterial memory CD4(+) T cells and inefficiently induce bacteria-specific effector CD4(+) T cells from naive T cells; however, they initiate the development of regulatory Foxp3(+)CD4(+) T cells, which are able to suppress the proliferation of autologous bystander T cells specific for the same bacteria. In contrast, dermal DCs that reside in the deeper dermal layer of the skin efficiently present bacterial antigens and provoke robust antibacterial naive and memory CD4(+) T-cell responses. In conclusion, LCs form a unique DC subset that is adapted at multiple levels for the maintenance of tolerance to bacterial skin flora.

To evade opsonophagocytosis, Staphylococcus aureus secretes various immunomodulatory molecules that interfere with effective opsonization by complement and/or IgG. Immune-evasion molecules targeting the phagocyte receptors for these opsonins have not been described. In this study, we demonstrate that S. aureus escapes from FcgammaR-mediated immunity by secreting a potent FcgammaR antagonist, FLIPr, or its homolog FLIPr-like. Both proteins were previously reported to function as formyl peptide receptor inhibitors. Binding of FLIPr was mainly restricted to FcgammaRII receptors, whereas FLIPr-like bound to different FcgammaR subclasses, and both competitively blocked IgG-ligand binding. They fully inhibited FcgammaR-mediated effector functions, including opsonophagocytosis and subsequent intracellular killing of S. aureus by neutrophils and Ab-dependent cellular cytotoxicity of tumor cells by both neutrophils and NK cells. In vivo, treatment of mice with FLIPr-like prevented the development of an immune complex-mediated FcgammaR-dependent Arthus reaction. This study reveals a novel immune-escape function for S. aureus-secreted proteins that may lead to the development of new therapeutic agents in FcgammaR-mediated diseases.

Human CD32B (FcgammaRIIB), the low-affinity inhibitory Fcgamma receptor (FcgammaR), is highly homologous in its extracellular domain to CD32A (FcgammaRIIA), an activating FcgammaR. Available monoclonal antibodies (mAb) against the extracellular region of CD32B recognize both receptors. Through immunization of mice transgenic for human CD32A, we generated a set of antibodies specific for the extracellular region of CD32B with no cross-reactivity with CD32A, as determined by enzyme-linked immunosorbent assay and surface plasmon resonance with recombinant CD32A and CD32B, and by fluorescence-activated cell sorting analysis of CD32 transfectants. A high-affinity mAb, 2B6, was used to explore the expression of CD32B by human peripheral blood leucocytes. While all B lymphocytes expressed CD32B, only a fraction of monocytes and almost no polymorphonuclear cells stained with 2B6. Likewise, natural killer cells, which express CD32C, a third CD32 variant, did not react with 2B6. Immune complexes co-engage the inhibitory receptor with activating Fcgamma receptors, a mechanism that limits cell responses. 2B6 competed for immune complex binding to CD32B as a monomeric Fab, suggesting that it directly recognizes the Fc-binding region of the receptor. Furthermore, when co-ligated with an activating receptor, 2B6 triggered CD32B-mediated inhibitory signalling, resulting in diminished release of inflammatory mediators by FcepsilonRI in an in vitro allergy model or decreased proliferation of human B cells induced by B-cell receptor stimulation. These antibodies form the basis for the development of investigational tools and therapeutics with multiple potential applications, ranging from adjuvants in FcgammaR-mediated responses to the treatment of allergy and autoimmunity.